June 30  Last day of June, first official day for my gallery...  My POS terminal showed up at 10 am yesterday, so I didn't have to sit around  all day waiting for it!  The business name is only allowed so many characters on the 'sales' slip so rather than stopping after Fireball Gallery  which is logical and makes sense....  the 'programmer'  keeps typing until they run out of  available spaces.... Guess what you get
"Fireball Gallery & Stud"
I really want to know where the stud is!  Duddley always thought his name should have been Studley...
Last night it just poured here actually I guess it was this morning because it was about 6 am, so far since I got up this morning it's just misting.... But the forcast for tomorrow is hot and muggy.  Since the gallery is now open daily my updates will be around noon AST , since I'm going to start the day by making beads, since it is a big hassel to run and answer doorbells half way through a bead...  However based on last year actually being open is irrelevant, I had people from 8:10a.m I served them in my Yukata  ... to 9 or 10 at night... if there is a light on anywhere in the house it's fair game!

June 29 Still overcast.. It poured last night, but I don't think we're getting nearly as much rain as some of the East Coast!  Everything is really green and the slugs are very happy!  I rescued a bunch of half dead plants from 'greenhouses' yesterday, perenials that I grow never look as nice as the ones in the picture on the tag!  Spent yesterday in Calais and St Andrews... (St Andrew's was delivering the birds I don't make anymore!!!)  Would have liked to go to Eastport put the ferry isn't starting until July 4th!   After the fog burned off yesterday it got really hot and muggy...  I like dry heat!  Today I get to sit around and wait for my POS (Point of Sale) Terminal to be delivered and installed.. then the customers can start pouring in!  I got a really cute answer for my game on Tuesday
Monet Puffins's Family Choir   !  His picture is up now I found him preening in a bowl in the gallery.
June 27 Still overcast... If I can find Monet I will photograph him today... he seems to have gone walk about... Should have checked Em's mouth before he and G went to Saint John yesterday!  He still steals beads  If you see him running past with his mouth slightly open .. it's because he's moving my beads, and has one in his teeth...  he doesn't like the way I organize them.... some year I will find his stash!  I do have a few fish in the kiln.... Need to see if I have any pairs!  Fish earrings just have to match in size colour is irrelevant.  I'm making a bunch of  tiny stained glass birds for a St Andrews gallery now too, they're getting delivered tomorrow... I've tried to persaude people that I don't do birds anymore... but so far no one believes me!

June 26  Another person got it right so I shouldn't have to add any more hints right???   Yucky again today... However yesterday afternoon was lovely, so I stuck out my open flag and got some real customers! Sold most of my Hollow Fish so I guess I know what I'm making today!  Saturday we spent in Saint John buying power tools to replace the ones that the scumball thieves took... The Chain Saw was easy... there was only one in our price range... however circular saws  there was way too much choice  Finally settled on a DeWalt,  Sears was the only place that we looked at shavers, most of those were way over our budget too... all the Pillashaves were too much Money,  so he got a Remington...   We were in Saint John so that we could go on a dinner Cruise on the Saint John  River... it was sponsored by the local P'Eng Society...  The weather was OK it was very calm and quite warm but sun would have been nice!  At  least the fog didn't roll in until the last 15 minutes... the boat was built in Louisiana in 1960... so does that mean we went on a Louisiana River Boat Cruise???  The captain was a retired Irving Tug Boat operator guess he didn't like retirement so bought himself a boat so he could keep cruising the River!

June 24  Yucky rain and fog....  This is the weekend folks I want sun!!!!  This is my last weekend of freedom I open my gallery  next Friday and my website says I will be open every day until Sept 3.... Maybe I can train duddies and em to sell....
Monet McPuffin is sitting on the kitchen counter waiting to be photographed... he got into my new Thompson Enamels and 'painted' his ice cube, but being a sloppy painter got some on his white tummy too!  So Monet comes with a lichen and barnacle cover 'pseudo rock' to sit on ... as soon as I can find a sun beam you'll get a photo!  Busy doing a couple of small stained glass orders as well as beads and trying to get the gallery ready to open next Friday... Got some new display 'stands' so now have to fill them!  The rest of the little 'amulet' bags are on the home page... I called the scan 'Seed Bags' I can imagine the look of distain on the average prairie farmers face if  yourefered to those as seed bags  in their presence!
June 23 Fog starting to lift....  I put the new game up last night about 9pm and already have a right answer!  Since it's so easy I won't give any more clues today!  Finally resized all the interior pictures of  our cabin last night...   "Cabin at 309 Douglas Manitou Beach SK" .  Manitou Beach was the western Canadian resort in the 20's and 30's and has had numerous ups and downs since then!  My cabin was built as a house in the early 20's for CN railway workers!  (it shows up on a survey plan from 1928).  G spent all day yesterday cleaning 'seagull droppings'  off of  Money-Pit ... with no mast is was a Seagull Magnet for the month we were away...  It now has it's sails too...  so..now all it needs is the wind vane that he took off while he was manhandling the mast and forgot to put back on before he put the mast up.. He's talking bosun's chair with me as the ginny pig  to get it up!  I don't thnk so.  (Especially since it sounds like he's building the chair!)  Update on the Double Helix Glass... Jill didn't get her glass either, even though the site took her money.... but they had no glass left, so she's getting her money back but no glass, which means I don't get any either!  Will add a scan of the little seed purses later! Here is one...(these are slightly bigger beads than normal 10's instead of 11's I think) now for straps... any suggestions. 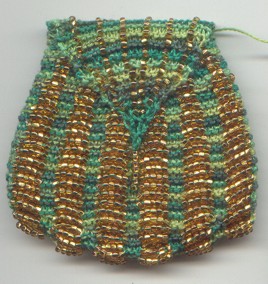 
June 10 Still in Watrous/ Manitou and still at the library,  The weather now sucks, it's rainy and cold and we have a lawn that really needs to be mowed before we head for home tomorrow! Spent yesterday in Saskatoon, too rainy and cold to do anything beach like!
June 6  Still sitting in the Watrous library, the weather all weekend was hot and sunny and I got even more sunburnt!  Yesterday it rained... but today it was sunny and windy.  Started painting the bathroom door today, so now am covered in red paint!  Yesterday we went into Saskatoon for the day, figured since it was raining it was a good day to leave!
June 1... Sitting in the library in Watrous... Today was really sunny and I burnt myself pulling weeds!  Will try and update the anniversary party etc later!  But everybody had a good time and my salmon all disappeared!  We had fun decorating the 'party room'!